Goldeneye Duck– Though the light was poor and so the beautiful amber eyes of this pair of Goldeneye didn’t shine through, and they were rather far away, it was a delight to watch them at Old Moor yesterday. Apart from a very small number nesting in the Highlands, Goldeneye come here to overwinter on our lakes and reservoirs in winter, from Northern Europe. Goldeneye are tree-nesting birds, medium-sized, with large heads. The female is smaller than the male and has a chocolate-coloured head but the similaritly bright amber-gold eyes. The male is a gorgeous black and white with a greenish-black head. They feed in a very characteristic way, fanning their tails and raising the front of their bodies from the water-surface, before diving in shallow water for small fish and invertebrates. (Old Moor is going through a lot of changes at present, adding more scrapes and wetlands, and more features for children to explore nature).

Grey Heron- On a still, grey New Year’s Day at Rye Nature Reserve we watched this statuesque mature Heron stalking the shallow waters, among diminutive Redshank. Last autumn I featured an immature Heron and the colouring, size and length of crest and chest feathers are all more striking in adults like this. They have an ancient appearance and sure enough, 7 million year-old fossils bearing a close resemblance to today’s Heron’s have been excavated. They also have an aloof bearing which may account for the ancient Romans believing Heron’s to be birds of divination.  They 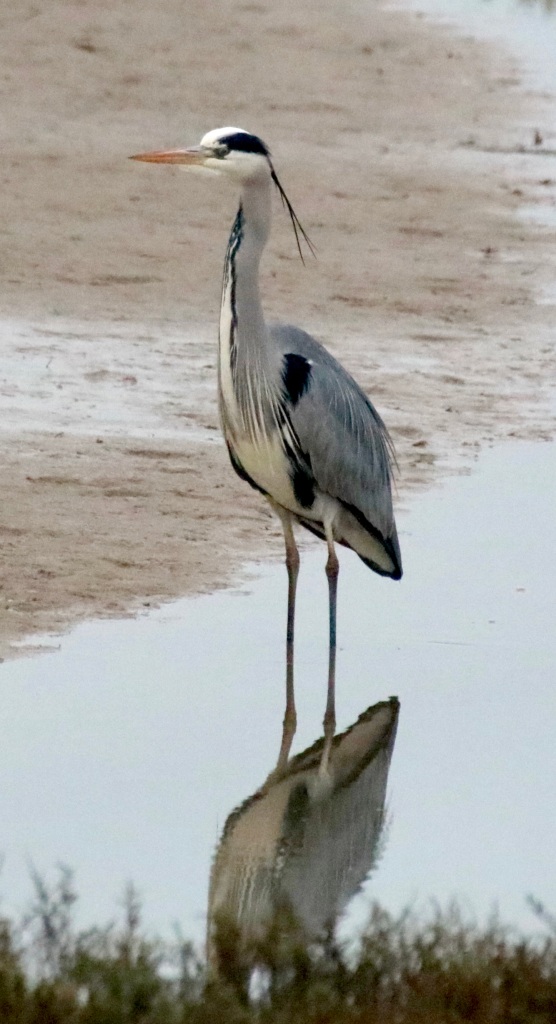 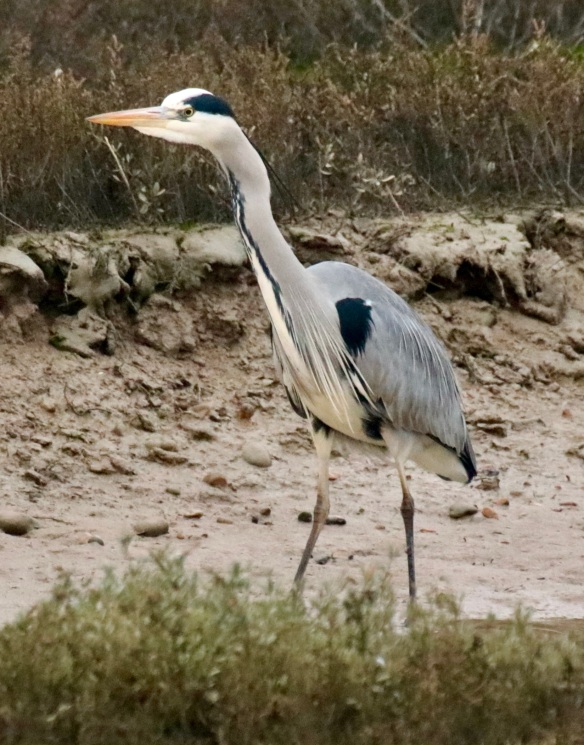 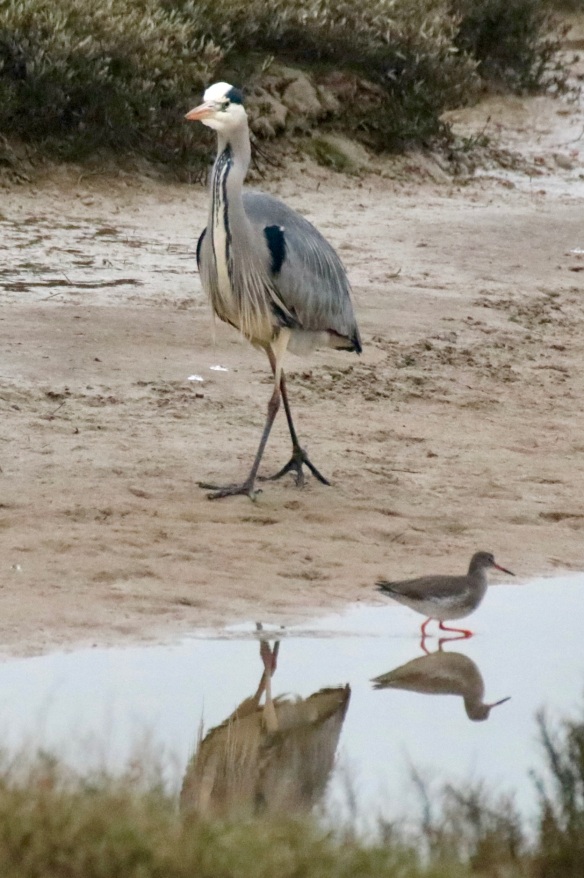 were also prized as food in the past. When George Neville became Archbishop of York in 1465 400 Heron’s were served up to guests! Conditions: Dry with some sun. Temperature: Max 9 Min 5C.

There is a juvenile Grey Heron fishing regularly on Monyash village pond where, incidentally, there are numerous breeding Goldfish, as well as native fish, due to someone in the past unadvisedly dumping their pets, which now thrive several generations on. This is probably a second year juvenile as, though it hasn’t yet got the glossy feathers and black markings of a fully adult bird, it does have the beginnings of a 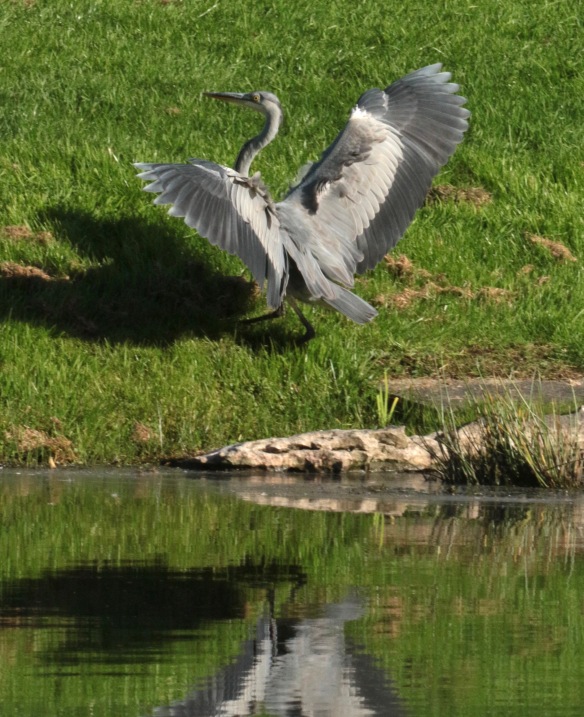 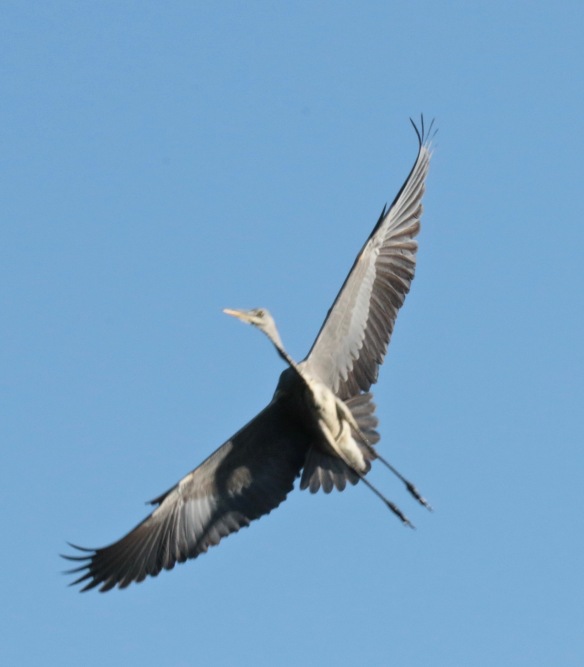 . Even though not fully mature, its wingspan is huge, as the photos show. Conditions: Sun and cloud. Temperature: Max 15 Min 8C. 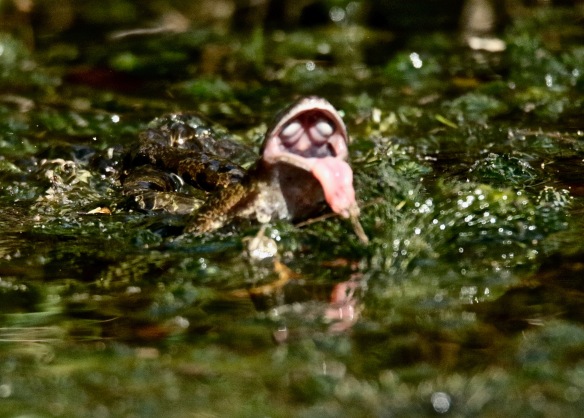 Common Frog, with mouth open and tongue extending for its prey

Common Frog in process of swallowing

The Common Frog’s sticky tongue. I was watching a Crane fly (daddy longlegs) skipping along the surface of a friend’s pond the other day, when this Common Frog, previously invisible, popped its head out of the water and, in an instance captured the Crane Fly. When I looked at the photo’s I had caught something I had never seen before in real life- the inside of a frog’s strange mouth and its tongue. The frog has evolved something we human have never been able to invent yet, a substance, the saliva, that can change from being very thin and fluid, for catching the prey, then very viscous and sticky for holding onto it before returning to being thin to relate the prey in its mouth so the frog can swallow it, all in a split second. The tongue is also very soft, allowing it to rapidly change dimensions– from being inside the mouth to extending a third of the length of the frog’s body, the equivalent of ou 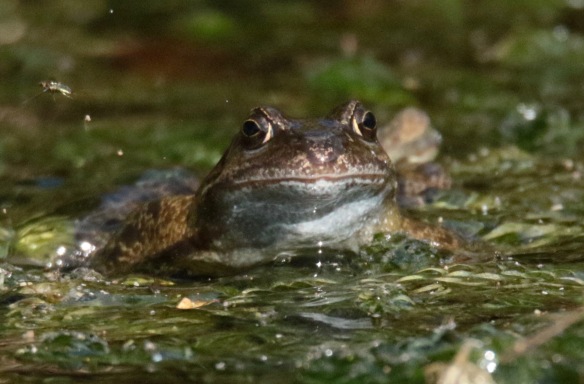 r tongue reaching our belly button! As you can see from the photo’s, in the process of swallowing the Frogs eyes move up and down, too! An extraordinary creature all round. Conditions: Cool and mostly cloudy. Temperature: Max 14 Min 7C.

Common Darter Dragonfly- as its name indicates, this is the most common Dragonfly in the UK and can be found around almost any sort of body of water, even stagnant pools. Darter’s are a group of Dragonflies which do just that- they hover and then dart forwards to catch their prey mid-flight, before returning to a favourite perch to consume it. If you notice these Dragonflies, look out for their perches, often atop a plant or fence-post, but they can even be on wooden board-walks, heating up in the sun. Darters aren’t as restless flyers as Hawkers. The Common Darter female and juveniles are yellowish-brown bodied but the males are red-bodied. They can be distinguished from the less common Ruddy Darter by the former being smaller and having black legs. The only other thing you might confuse them with in flight is the Large Red Damselfly which has a longer, narrower body and, like all Damselflies, rests with its wings folded, while the Darter typically rests with its wings held forward. 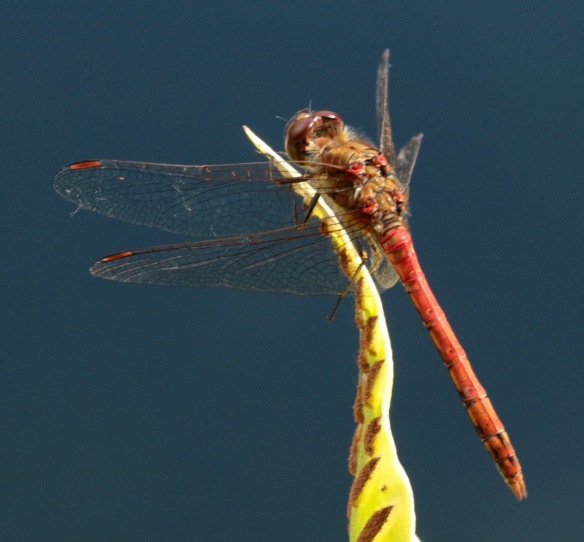 Mating Damselflies are always fascinating to watch. On the Chesterfield canal we watched Common Blue and Blue-tailed Damselflies in their tandem flying mode, as well as in the ‘wheel formation’ when they are actually mating. The male Damselflies, typically more brightly coloured than the females, use their claspers, at the end of the abdomen, to clasp a special ‘shield’ on the females thorax, and the connection is strong enough for them to fly in this formation, as well as to land, rest and mate. Some species mate quickly and separate, while others remain linked for several hours to deter another Male from mating with the female. In fact, some males dig out the sperm of a previous Male In order to replace it with their own. You can watch this tandem flight and wheel along many slow-flowing streams and canals or pools. Conditions: A more normal summer day, with sun and cloud. Temperature: Max 23 Min 13 C. 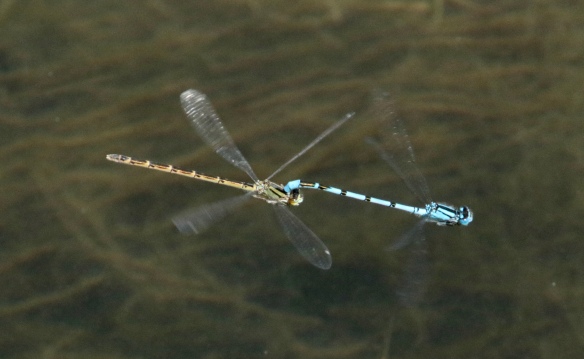 Blue-tailed Damselflies in tandem at rest

The Banded Demoiselle is a large damselfly with a beautiful, flitting flight with which the male attempts to attract a female. It occurs on slow-flowing rivers, canals (as this one was, on the Chesterfield Canal) and pools, unlike the similar Beautiful Demoiselle which frequents faster flowing water. Highly territorial, if you watch it from the bank you should be able to work out its territory, as well as where it rests and takes off from, as I did to

photograph this one last week. Very sensitive to pollution, they are therefore good indicators of clean water. They are an absolute delight to watch, as the sun glints off their metallic green/turquoise bodies and the fingerprint wing-patch on the male, which gives them their name. The females have uniform coloured, greenish wings. Conditions: Very hot with sunny periods. Temperature: Max 30 Min 18 C.