Gorgeous sunny day for Christmas, down South anyway, then yesterday Sian told me of the inches of snow falling in Sheffield while down south we had torrential rain and gale-force winds. For something altogether calmer, Squirrels frequently strip bark from trees and here’s one recently in the Botanical Gardens doing just that. Though it is a well known phenomenon there are various theories about why they do it- some rather fanciful. The most likely is that they strip off the tough outer bark to reveal the sugar and sap-filled layers of cambium underneath, for food. They probably also strip bark for nesting material. Since this one was doing it in winter, either might apply. They are very tame in the Botanicals and, as can be seen, come up close (they willl take food from your hand) but there are less people around offering food in winter. (When he was a toddler walking near Forge Dam, one once speedily climbed up Kierans arm and ate some of his ice-cream!). They seldom completely ‘ring’ trees (eat the bark all the way round) as deer can, fatally for the tree. However, stripping bark can weaken trees and let infection in. Conditions: Calm after the storm. Snow clearly still laying in Sheffield but just very soggy in Catsfield. Temperature: Max 1 Min -1 c. 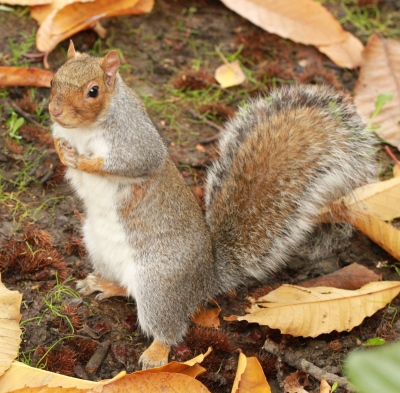 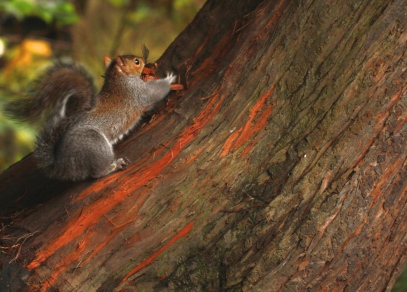 This squirrel was busy stripping the bark of this pine 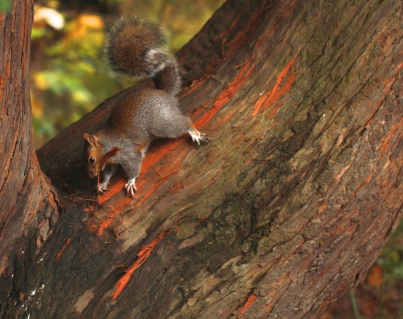 It had stripped quite a few strips already, as can be seen from the exposed red under the bark 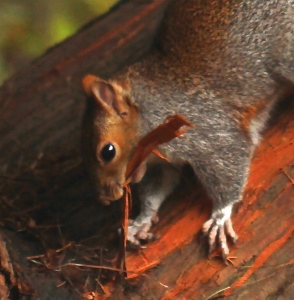 Close-up of it gripping the bark in its teeth.