The Gatekeeper (also called the Hedge Brown) is another lovely Butterfly of mid-summer,  and is around gardens, hedgerows and fields right now. It is smaller and more foxy-orange in colour than its relative, the Meadow Brown, and tends to rest with its wings open, unlike the Meadow Brown which more often rests with its wings closed. It also has double white spots on its ‘eye’ marking and white spots on its hind-wing. I’ve included a photo of both to highlight the differences. It’s thought that the small ‘eye’ markings on this family of Butterflies is to deflect predators (usually birds) from attacking the body, rather than to scare off predators like the bigger eyes of the Peacock (see photo). The Gatekeeper is sexually dimorphic, so the male and female differ slightly- the female has a larger patch of orange while the male has a dark patch of scent scales (androconia) on its fore-wing. These scales give off a scent to attract the female butterflies. Gatekeepers, thought to get their name from their habit of resting on and fluttering near field gateposts, have relatively short probosces, so they favour feeding on open flowers like bramble, ragwort, fleabane and, in our garden, Marjoram. The caterpillars feed on long grasses. Conditions: A sweltering, close day with rain predicted after midnight. Temperature: Max 25- Min 16 C. 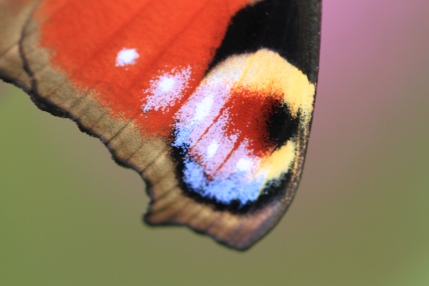 ‘Eye’ of the Peacock which is thought to have evolved to frighten predators, compared to the eyes of the ‘Browns’ which are thought to just deflect any attack from the body to the wing. 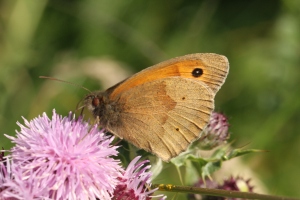 Its relative, the Meadow Brown, at rest, for comparison. 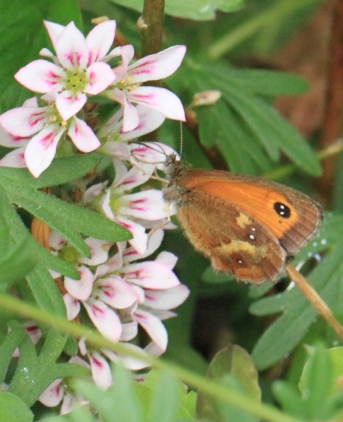 Gatekeeper butterfly, showing its double white spot in the ‘eye’ and white spots on the hind-wing. 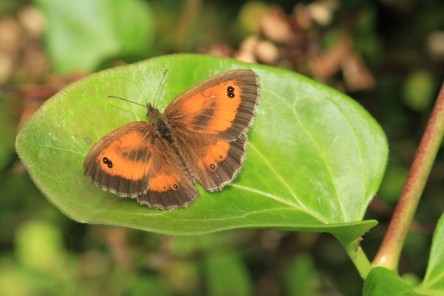 Male Gatekeeper at rest, showing its patch of dark scent-scales on middle of its fore-wing.