A Song Thrush paid a quick visit today. Most of us love their beautiful, repeated calls, sung from tree or roof-tops. Each Song Thrush has as many as 100 different phrases in their repertoire. Sadly, their numbers are so greatly reduced, especially on farmland, that this once common bird is now on the Red List for Endangered Species. If you’re interested in finding out more about The Red List visit the website http://www.iucnredlist.org and clicking on the ‘Discover More’ section. There are great features on fascinating species, world-wide. The Hellebores are well-out now. Because the flowers droop and hide their beautiful features, I picked a few and floated them in a shallow dish. Conditions: Fog in the morning, burning off to a bright, dry, colder day. The clear night produced views of the Northern Lights as far South as Essex. I got up a couple of times in the night and saw nothing! Temperature: Max 7- Min 1c

There are many Blackbirds around the garden still. Like many birds, Blackbirds are ‘dimorphic’, meaning the males are visibly different from the females. In Blackbirds, the differences are in colouring, the females being brown with mottled or speckled chests and brown beaks. They can be mistaken for thrushes, and are members of the thrush family. Females do most of the nest-building and incubate the eggs by themselves so need more subtle colouring for camouflage. The males display for territory and compete for female attention so have evolved to have stronger colouring- black bodies and yellow/orange beaks. Pairs usually mate for life. Blackbirds may have several attempts at nest building, since their nests, built loosely in bushes and hedges, are vulnerable to damage, cold and predation by squirrels, crows, magpies and cats. They also have more than one brood a year to compensate for predation. Conditions: Heavy showers and gusty west wind with sunny intervals. Temperature: Max 8- Min 2c

Male Blue Tits display to their mates by very rapid fluttering of their wings (hence the blur on the lower photo!) Both search for nest sites. The male then calls the female to examine a favoured site for her final approval. Females build the nests alone. In the wild, they nest in holes in trees or structures. Research shows they raise fewer young in boxes than in natural sites, which may be due to the relative shortage of caterpillars (the staple diet for young) in gardens.  Conditions: Sunny intervals and dry most of the day. Temperature: Max 8- Min 5c 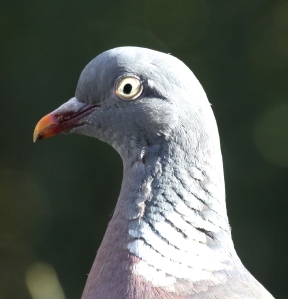 Yesterday’s blog showed a Wood Pigeon washing in the pond. A decade ago, Wood Pigeons hardly ever turned up- now we get them all year round, several at a time. In early spring they strip new leaves from Celandines and Ladies Smock. It is partly their varied diet that makes them thrive, eating crops, seeds,  insects, fruit and buds. They feed their young a ‘milk’ which is more nutritious than human or cows milk. made in fluid-filled cells in their crop.

Purple Crocus, later than the yellow, are well out now.

They go by the lovely Latin name (Columba Palembus) and Scottish name ‘Cushie Doo’  from their gentle ‘cooing’ call but they can be a big nuisance for farmers and gardeners alike. Conditions: Breezy and dry with sunny intervals. Temperature: Max 9 – Min 2c 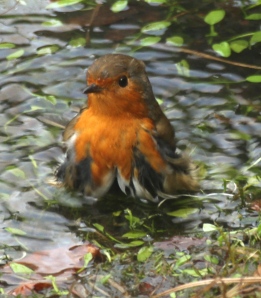 If it’s possible to have any water, even a shallow puddle, a bird bath, a dish or a sunken bucket it’s worth having. Just make sure it’s safe for children and there are stones or a piece of wood for animals to use to safely climb back out, if the water is too deep). Birds need to drink each day but washing also cleans their feathers and helps remove parasites. Conditions: A still, dry day with sunny intervals. Temperature: Max 10 – Min 6c. Areas in the West are due heavy rainfall once again 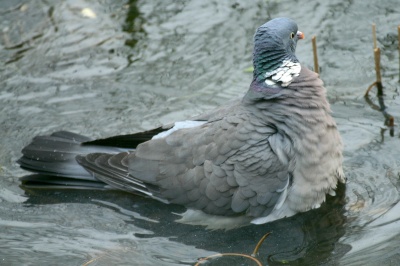 A Wood Pigeon taking a dip.

As with Bumblebees, the only wasps to live through winter are the newly fertilised Queen Wasps. Like most insects, they rely on external sources of heat to warm up, so need to hibernate but will sometimes emerge when heat is high in a room. Many bees and wasps have evolved colour patterns to function in the opposite way to camouflage. Yellow and black bands act as a warning 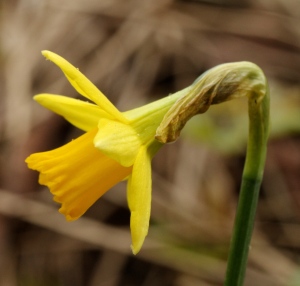 Our first miniature Daffodils fully out

to predators that the creature is dangerous, either tasting unpleasant or, in this case, having a poisonous sting. An even more fascinating aspect of evolution occurs when creatures mimic the warning pattern. Hover flies, for example, are harmless. However, they not only mimic the black and yellow stripes of bees and wasps, but will press their abdomens into your skin as though about to sting you! Research has shown that, while some creatures learn avoidance of animals displaying warning colour, some (including Great Tits,) have inborn avoidance behaviour. Conditions: Dry and mostly cloudy, light rain later. Temperature: Max 11 – Min 8c

Continuing the theme of the wild-life value of winter flowering shrubs, I’ve been watching Blue Tits taking nectar from the base of the Winter Flowering Honeysuckle. At this time of year many birds are busy stoking up on fat- and sugar- rich foods, ready for nest-building and breeding. More birds are spending time in pairs, or establishing pairs by displaying. This pair were feeding on nectar and insects in the Honeysuckle. Huge Bumblebees were weighing down snowdrops as they fed on them in the sunshine.   Conditions: Dry, sunny spells, S.W. breeze. Temperature: Max-9 Min 8c

A pair of Blue Tits spend increasing time together.

Today I managed to photograph a Bumblebee feeding on the Winter-flowering Honeysuckle. It is well-dusted with pollen! They are quite hard to identify, as colours can fade over winter. I think this one is a Buff-tailed Bumblebee (correct me if I’m wrong), one of the species that emerge on mild winter days. It has to be a Queen Bee. The last brood of Bumblebees in the year produce several queens which will mate and then be the only Bumblebees to survive to the next year, hibernating by lowering their metabolism. Conditions: Sunny intervals and showers, with a gusty SW wind. Temperature: Max 7 – Min 4c 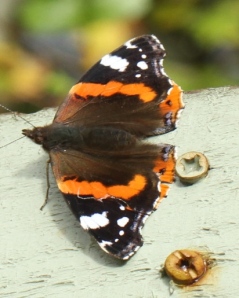 Only yesterday, I mentioned the value of winter-flowering plants for insects and today the sun brought out a Bumblebee and a Red Admiral. Butterflies mostly overwinter as eggs, larvae or pupae (chrysalis) but a few British butterflies can hibernate as adults. These include Peacocks, Brimstones and Red Admirals. They shelter in tree-hollows, houses and sheds, only emerging on sunny days of at least 10c. Even this is risky- they can die if the temperature falls before they can find shelter again. Keep looking- with global warming, there are more sightings of adult Butterflies in winter. The other great sight, a favourite for me, was our first Primrose, full out in the sun. Conditions: Sunny intervals, showers after a drizzly start. Temp: Max 10 – Min 5c

First garden Primrose of the year 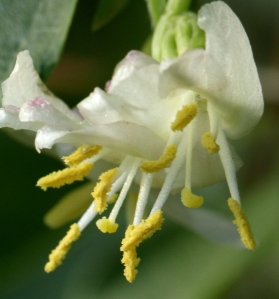 The Winter Flowering Honeysuckle (Lonicera Fragrantissima) forms a bit of a spronky, lax

bush with smaller flowers than later honeysuckles. It’s citrus scent is wonderful and carries a long way on the air. Like other winter flowering, scented shrubs it is also an invaluable source of nectar for any Bumblebees and Honeybees that emerge during mild spells at this time of the year. It tolerates quite hard cutting back if you don’t have much space. Walking the Don from Neepsend to Lady’s Bridge  (it flowed surprisingly quietly) the kingfisher didn’t turn up today but there were Blue, Great and Long-tailed Tits, Moorhens and Mallards galore, a Wren exploring the banks and a beautiful Grey Wagtail, feeding along the water’s edge.             Conditions: A still, dry day with sunny intervals. Temperature: Max: 10 – Min 8c